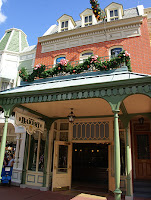 Walt Disney World does a great job at engaging all of our senses as we tour the theme parks.  The visually stunning icons like Cinderella Castle or Spaceship Earth and the amazing cookie aroma being emitted from the "smelitzer" outside of the Main Street Bakery are just a few examples.  However, I believe that the most important and often overlooked aspect of the Walt Disney World experience is what we hear.

As many of you know, the Disney theme parks are set up to be like a movie that you are entering.  The best example of this is definitely the Magic Kingdom.  As you walk through the tunnels under the railroad station, you are greeted by coming "attraction" posters.  Next, you arrive in Town Square and the curtain has risen on a production that you just became a part of.  As you walk up Main Street, the "credits" are posted on the second floor windows, which pay homage to the cast members who were instrumental in creating this wonderful place.  There are countless more movie-like examples throughout the parks, but you see what I'm getting at.  Now, what would a movie be without a soundtrack?
The music that is played throughout the entire Walt Disney World Resort really helps to make the magic.  There is almost never a time that you are walking through one of the theme parks or even around a resort hotel where there isn't an appropriately themed soundtrack playing in the background.  Sometimes it may simply be a quiet instrumental piece that is setting a mood while other times it could be a major Disney movie hit that is getting us excited to enter an attraction.  The bottom line is that Disney knows how to use music to really add to our experience.

There are several souvenir albums available containing some of the music that we hear at Disney World.  However, what is available to the public is a very small percentage of the overall catalog.  This is where DTunes Radio comes in.  I discovered this website about a year ago and it is such a great source of streaming Disney audio.  It contains eight "live" stations that play everything from Disney movie music to Disney World background music to full theme park attraction soundtracks.  There are also stations dedicated to Disney parades and fireworks shows as well as resort hotel background music.  Much of what you can listen to on this site is just not available anywhere else that I'm aware of.  If you want to close your eyes and be "virtually" back on your Disney World vacation, this is the place to do it.  Talk about getting a quick Disney fix!
Check out the DTunes Radio site at dtuneslive.com.  It is free to open an account and listen to all of the great Disney music and soundtracks.  There are several interesting features and options on the site including forums and Disney news.  This site is also mobile friendly as I often listen on my iPhone!
Have a Disneyriffic day and remember to keep moving forward.  See ya real soon!
Posted by Dave Drumheller at 9:56 PM