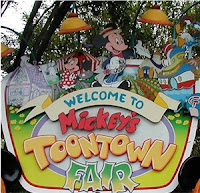 In addition to my normal articles about using modern technology to stay connected to Walt Disney World, I have decided to launch a new segment called O.T.D. or "On This Date."  I will be highlighting important dates in Disney history on the anniversary of those events.  I will be emphasizing the history of Walt Disney World by writing about park and attraction openings, special events, and major changes to the resort.  Although most of what I will be writing about will have taken place many years in the past, I am posting my first O.T.D article only hours after this particular event took place.  I am talking about the closing of Mickey's Toontown Fair in the Magic Kingdom.

Mickey's Toontown Fair was the first and only "land" to be added to the Magic Kingdom.  Tonight, it became the first land to be closed.  It opened in June of 1988 as Mickey's Birthdayland to celebrate Mickey's 60th birthday.  It was intended to be a temporary area of the park and was only supposed to last for about a year.  This land became so popular, especially with young children, that Disney decided to keep it open and changed its name in 1990 to Mickey's Starland.  Disney "re-themed" it one more time, and in 1996 it became Mickey's Toontown Fair. 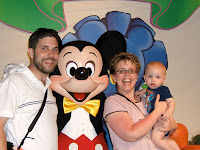 Although it wasn't a big area in the Magic Kingdom, Mickey's Toontown Fair was certainly very popular.  It was the home of Goofy's barnstormer which was the only "kiddie coaster" at Walt Disney World.  It also housed a great little playground where kids, including my own, would play for long periods of time while the grown-ups looked on from park benches.  It was a nice place for us adults to give our aching feet a rest!  The biggest draw to this land, however, were Mickey and Minnie's country homes.  Behind Mickey's house was the "Judges Tent" where you could actually meet the big cheese and his girl.  Mickey's Toontown Fair will always have a warm place in my heart, for this is where our son Chris was first introduced to these famous mice.

The closing of Mickey's Toontown Fair is bittersweet.  On one hand it is sad to see this area of our beloved Magic Kingdom close after being there for over 20 years.  On the other hand, there is great excitement building for what will be replacing it.  This land will be absorbed by the incredible new Fantasyland expansion that is currently under construction.  Fantasyland will be doubling in size with the new section opening in phases starting in 2012.  The area of Fantasyland that will be replacing Mickey's Toontown Fair will be known as Storybook Circus.  The only attraction that will be remaining from the land that closed tonight will be the kiddie coaster, which will be renamed The Great Goofini.  In addition to the coaster, this area will be the new home of an expanded Dumbo the Flying Elephant ride which includes an interactive queue.

The biggest question on most people's minds is "Where are we going to be able to meet Mickey and Minnie?"  Although their country houses will soon be demolished (which is not a pleasant thought!), Disney is hard at work at creating a new meet-and-greet area in Town Square Exposition Hall, right inside the entrance to the Magic Kingdom.  I think stopping in to say hi to Mick and Min will be a fun way to start your day.  We can't forget that this was all started by a mouse!

So when the Magic Kingdom opens tomorrow, the guests walking through the gates won't see Mickey's Toontown Fair depicted on their park maps, however the memories that most of us made there won't soon be forgotten.  As we look forward to the Fantasyland expansion, I'd like to say: "Goodbye old friend and thanks for the memories!"

Have a Disneyriffic day and remember to keep moving forward.  See ya real soon!
Posted by Dave Drumheller at 11:55 PM