EPCOT Center opened on October 1, 1982 as the second major theme park at Walt Disney World.  The Imagination Pavillion opened with the rest of the Future World section of the park and featured the 3-D movie Magic Journeys.  It wasn't until the following March 5th that that the Journey Into Imagination ride debuted.  This attraction was one of EPCOT Center's most popular and entertaining.

Journey Into Imagination was an attraction for all ages, featuring slow moving ride vehicles in an experience where imagination was highlighted through visual arts, storytelling, and science. The main characters were Dreamfinder and his beloved little purple dragon, Figment.  In the early years of EPCOT, when it was known as EPCOT Center, Dreamfinder and Figment were the character icons of the park. Disney didn't bring the "traditional" characters into EPCOT until many years later. 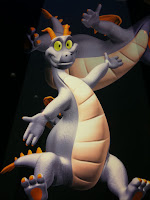 There is an interesting story behind how the name Figment came about.  The inspiration for the character came to Imagineer Tony Baxter while he was watching an episode of Magnum P.I.  In Tony's words: "I remember the day that Figment came into being.  I was watching a Magnum P.I. show on television and Higgins' garden was all torn up because Magnum had hidden a goat in the yard.  When Higgins said that something was destroying his garden, Magnum said, 'Oh Higgins, it's just a Figment of your imagination.' Higgins looked at him and said, 'Figments don't eat grass!'  And right then I thought about this character that everyone knows about and has never been visualized, so I came into work the next day and said, 'I've got the star of our show!"


The original version of Journey Into Imagination closed in 1998 and reopened as Journey into YOUR Imagination on October 1, 1999.  It featured an updated theme based on the 3-D movie Honey, I Shrunk the Audience.  Now guests would take a tour of the "Imagination Institute" which would take them through numerous labs including Sound, Illusion, Color, Gravity and Connections.  Although still an entertaining attraction, the new version did not include Dreamfinder and there were only a few cameos by Figment.  Mosts guests missed the original Journey Into Imagination and the attraction closed in 2001 for another refurbishment.  It reopened on June 2, 2002 and brought back Figment in a much more prominent role.  Although it isn't anything like the original, this current version isn't bad and most guests are happy to see the return of the cute, little, purple dragon.


March 5, 1983 also has personal significance to me and my family.  We were actually on a Walt Disney World vacation at that time.  Unknowingly, we probably were among the first guests to actually ride Journey Into Imagination.  I was eleven years old at the time, and this was the trip that started my obsession with the vacation kingdom.  I have visited 25 times since then and look forward to going again as soon as possible.  Thanks mom and dad for lighting that Disney spark and helping to create so many great family memories!


Have a Disneyriffic day and remember to keep moving forward.  See ya real soon!

Posted by Dave Drumheller at 10:37 PM