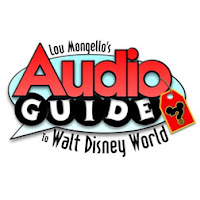 As most of you know, the Walt Disney World online community of fans has grown tremendously over the past five years.  Literally thousands of enthusiasts listen to podcasts, read the blogs and visit countless websites dedicated to the subject of the world's most visited destination.  There are a handful of leaders in this group and at the top of the list has to be Lou Mongello.  This is a man who's boundless energy and passion for all things Disney World is inspirational to those of us who admire his work.  Lou is the author of the Walt Disney World Trivia Books, the host of the WDW Radio Podcast (which I wrote about in my very first article), and the publisher of Celebrations Magazine. He is also the writer, narrator and producer of the Audio Guides to Walt Disney World which I am featuring in this article. 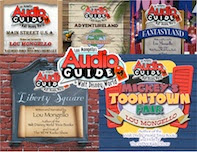 The Audio Guides to Walt Disney World are a unique and very interesting way to learn about the vacation kingdom.  So far Lou has created five Magic Kingdom audio guides which are available on CD or digital download.  Currently available are Main Street, USA, Adventureland, Fantasyland, Liberty Square and Mickey's Toontown Fair.  Each Audio Guide contains over an hour of fascinating information including the details and history of each land.


The Audio Guides are all narrated by Lou himself and contain ambient background audio appropriate to whatever he is describing at the time.  He takes you on a virtual tour of each land and you actually feel like you are strolling through the Magic Kingdom with him.  Although they can be enjoyed anywhere, Lou did such a masterful job at producing each guide that you can physically walk through the park while listening to his descriptions on your iPod or iPhone.  Most attractions, shops and restaurants have their own dedicated tracks allowing you to quickly find what you want to learn about.  Similar to the term often used to describe EPCOT, I don't think it is a stretch to refer to the Audio Guides to Walt Disney World as "edutainment."  Lou certainly knows how to entertain his audience while enlightening us along the way.
The Audio Guides are an ongoing project for Lou.  He is currently working on the final two lands in the Magic Kingdom and hopes to move on to the other parks in the future.  All five of the current "albums" are available here as well as on iTunes.  They are very inexpensive and worth every penny!  As a Disney World fan, I can't recommend Lou's Audio Guides highly enough.  After listening to all five of the guides several times, it is hard to believe that they weren't actually produced by the Disney company.

In wrapping up this article, I just wanted to mention a few more things about Lou Mongello.  Although I haven't had the pleasure of meeting him yet, I feel like I've known him for years.  In listening to his podcasts each week, I've gained a high level of respect and admiration for what Lou does.  His passion and dedication show in all of his different endeavors.  What I find most admirable are his fund raising efforts for his charity that helps send sick children and their families to Walt Disney World.  As we say in the Disney community, Lou Mongello "gets it" and is one of the best at what he does.  To learn more about Lou, visit his website at wdwradio.com.
Have a Disneyriffic day and remember to keep moving forward.
See ya real soon!
Posted by Dave Drumheller at 11:16 PM