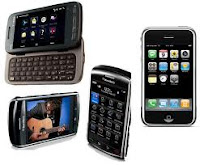 Now that we have entered the 2nd decade of this century, most of us over the age of 10 have a cell phone.  If your cell phone was manufactured anytime in the last few years, there is a pretty good chance that it contains a camera.  These cameras can be very simple, low quality afterthoughts or they can have the ability to take spectacular photos and even high-definition video.  No matter how basic the phone, just about all of them allow us to snap a picture and quickly send it to friends and family via a text message.  This type of text message is specifically referred to as an MMS (Multimedia Messaging Service) message. 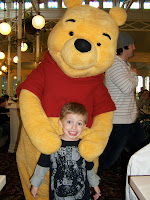 Walt Disney World is the most photographed destination on the planet.  In 2011, it would stand to reason that more picture messages are texted from here than from anywhere else.  This has to be one of the best uses of modern technology available today.  I have snapped pictures of my son Christopher standing with a prominent Disney character and they have shown up on his grandfather's Blackberry in less than 10 seconds!  The fact that grandpa is over 1,000 miles away is of no consequence.  The kids of this generation take this technology for granted, but it wasn't always this easy.

I have sworn that I would never use the term "back in my day," but it is becoming impossible to avoid as I approach 40 years old.  Soooooooooo, back in my day the process for delivering a cute picture of ME to my grandfather was as follows.  First, one of my parents would have to get in the family automobile (usually a very large sedan with bench seats in the front and back) and drive to the local department store.  They would need to go to the store to purchase something called "film."  If the film was bought too far in advance of our vacation, my dad would put it in the refrigerator to preserve it.  At the appropriate time, the film was loaded into the camera and we would be ready to take pictures on our vacation.  Actually, we'd be ready to take pictures in the airport, on the plane, and maybe checking into our hotel.  A roll of film only held between 12 and 36 pictures, so we were on a second roll well before we ever made it into the Magic Kingdom (the only park at WDW until 1982!). 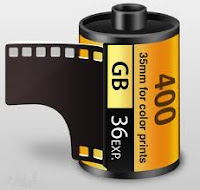 By the time our vacation was over, we would usually have 8 to 10 rolls of film to bring back with us from Florida.  Notice how I said rolls of film and NOT pictures.  We were still several steps away from actually viewing anything at this point and my grandfather wouldn't see them for weeks.  Usually a few days after recuperating from our trip, one of my parents would hop into the family car and head back to the department store, or maybe even a "Photomat," with the undeveloped rolls of film.  A few days to a week later, we would finally have our pictures.  Many of these photos would be out of focus or too dark, but we finally had them in our hands.  Then, probably close to a month after the original pictures were taken, my grandfather would actually get to see a picture with me and Mickey Mouse.  Today, the entire process from taking the photo, to texting it as an MMS, to my dad opening it on his Blackberry, takes under one minute!  We've come a long way in a generation! 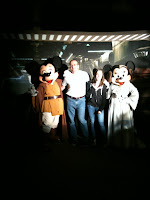 Now, lets fast forward to this week.  As I have mentioned many times since starting this blog, the Disney online community is very large but is made up of friendly, like minded people.  One of my online friends is Len Testa, who is certainly a leader in the Disney fan community.  In addition to being an author of the Unofficial Guide to Walt Disney World and part of the TouringPlans.com team, he is also one of the core four from the WDW Today podcast, which I featured a few articles back.  Len was nice enough to send me an MMS text message from the midnight Star Tours II event at Disney's Hollywood Studios, last Thursday.  It is a picture of Len and his daughter Hannah and it's a great example of how friends can instantly share a little bit of Disney World using their cell phones.  Thanks again Len!

Have a Disneyriffic day and keep moving forward.  See ya real soon!
Posted by Dave Drumheller at 11:32 PM