Today we say happy 23rd birthday to Disney's Grand Floridian Resort and Spa. On this day in 1988, it became the fourth Walt Disney World resort, joining the Contemporary, Polynesian and Fort Wilderness.  All three of these resorts opened in 1971, so the Grand Floridian was the first to be built in over 16 years. When the resort opened it was called the Grand Floridian Beach Resort.  It wasn't until the fall of 1997 that its name changed to what we have now.  Whatever the name, this deluxe resort has always been known as Walt Disney World's finest.

Disney's Grand Floridan Resort and Spa has several attractive features.  First, like the Contemporary and Polynesian, it is located right on the monorail. It boasts the best position on the line because the Magic Kingdom is only one stop away.  When you would like to get to the park as quickly as possible, there is no better place to stay. You are literally only a few minutes from the most visited theme park in the world.  Second, the Grand Floridian is well known as one of the nicest resort hotels anywhere.  As soon as you walk in the front doors you know that this place is something special.   With its five story lobby boasting Italian marble floors, stained glass domes, and cage elevator, you know that this place has class.  Often times there will even be a live orchestra playing as guests stroll through the lobby.

This resort was inspired by Victorian era beach resorts from the late 19th and early 20th centuries. It was actually modeled after the Hotel del Coronado just outside of San Diego, California. In addition to the main building that houses the lobby, the Grand Floridian has five, detached outer lodge buildings. Each of these is named after an island in the Florida Keys. This resort is also known for having many excellent dining establishments including Victoria & Albert's. That restaurant has the distinction of being the only one in Central Florida to currently hold AAA's Five Diamond Award. It has won this award every year since 2000. 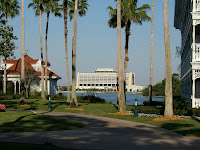 As you might expect, as nice as the Grand Floridian is, it is also very expensive. My family had the pleasure of staying in this resort for three nights back in 1990 when it was "only" about $200 a night.  As of this writing, the least expensive rooms during value season start at over $400 per night.  During busy times of the year, you could easily pay double that for a standard room and even as much as $3,000 per night if you want a fancy suite!  The only practical way to stay at this palace for the average family is to become a member of the Disney Vacation Club.  There are even  rumors that Disney will be building a dedicated DVC addition to the Grand Floridian in the next couple years.

Although it may cost a small fortune to stay at the Grand Floridian, it doesn't cost anything to "visit." In my opinion, this is one of the greatest things about a Walt Disney World vacation. As long as you are staying on property, you can visit any other resort and even use their pools in many cases. Between the great restaurants, numerous shops, and beautiful grounds you could easily spend half a day at the Grand Floridian. Even if you will eventually crawl into bed at one of the $79 a night All-Star Resorts, the cast members at the Floridian will treat you like royalty as you stroll around their spectacular resort on the Seven Seas Lagoon. So the next time you are vacationing at Walt Disney World, I highly recommend that you hop off the monorail one stop prior to the Magic Kingdom.  Happy birthday Grand Floridian!

Have a Disneyriffic day and remember to keep moving forward.  See ya real soon!
Posted by Dave Drumheller at 11:38 PM