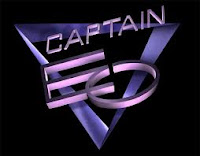 Today we celebrate the 25th anniversary of the original opening of Captain EO, the revolutionary 3-D film starring Michael Jackson. It was located in the Imagination pavilion on the west side of Epcot's Future World from 1986 until 1994. The attraction returned to Epcot as a tribute to Michael in 2010, where it continues to play today.
Captain EO is an exciting, 17 minute, sci-fi motion picture that was cutting edge back in 1986. It is considered to be one of the very first "4-D" films as it features in-theater effects such as lasers and smoke. In addition to the great visual effects, there were two original Michael Jackson songs that made their debut in the movie. The film cost an estimated $30 million dollars to produce. At the time, it was the most expensive film ever made on a per-minute basis. You can bet that alot of that went to paying Michael!

Although Captain EO was cutting edge for the mid 1980s, it pales in comparison to the technology that is available today. People experiencing the attraction for the first time, after last year's comeback, tend to think it looks a little dated and even humorous.  However, most of us who enjoyed it on its first run really liked seeing it return. From the nostalgic point of view, it brings back alot of memories of a time when big hair and moonwalking were in style. Although the visuals in the film are reminiscent of those seen on MTV during the Reagan era, the Michael Jackson music is timeless and still loved by millions around the world.
After his passing, there seems to have been a resurgence in Michael Jackson's popularity. The 2009 documentary film "This Is It," featured great interviews and rehearsal footage leading up to what was going to be his last tour. This movie introduced a new generation, including our 4 year old son, to Michael Jackson's music and talent. When we visited Epcot back in January, not only did my little guy recognize Michael but he also really enjoyed Captain EO. The show is a little intense for some youngsters, but most find it very entertaining.
I certainly recommend heading over to the Imagination pavilion to check out Captain EO the next time you are in Epcot. There is no telling how long the show will remain there this time around. If you are a fan of Michael Jackson or just grew up in the 80s, it is an absolute must see!
Have a Disneyriffic day and remember to keep moving forward.  See ya real soon!
Posted by Dave Drumheller at 5:49 PM