Today we celebrate the 10th anniversary of an important, yet often overlooked attraction in Hollywood Studios. Walt Disney: One Man's Dream officially opened on September 23, 2001. Up until this point, there had been very little in the parks about the man who started it all. Of course there are references, pictures, and even a statue of Walt, but One Man's Dream was the first attraction completely dedicated to the life and dreams of Disney himself.

Prior to the opening of Walt Disney: One Man's Dream, most guests didn't know much about Walt, other than he created Mickey Mouse and was the inspiration behind the Disney theme parks. This attraction   introduces new generations to the power of the ideas that came from this truly amazing figure in American history. It is really a nice mixture of a museum and a tribute. This self guided walking tour starts with the birth of Walt on December 5th, 1901 in Chicago, Illinois. It continues in a chronological fashion through his boyhood in Marceline, Missouri, his beginnings in the film industry, and finally into the design and creation of the theme parks. At the end of the walking tour, guests have the opportunity to enter the "Walt Disney Theater" to watch a 15 minute film about Walt. This film reveals the many hardships he overcame as well as previously unseen footage, including Walt talking about Mickey Mouse.

One Man's Dream has an incredible amount of memorabilia. In fact, this collection of over 400 items was flown in from California on a FedEx Airbus A300. For this flight, the plane was designated the "Spirit of Imagination." Many of these priceless artifacts had never been seen before publicly.  There is really too much to describe here in one article, but I'd like to mention some of the notable pieces. There is a re-creation of Walt's office, complete with his actual chair, desk and cabinet. You can also see his animation camera stand where he created "Steamboat Willie" and "Plane Crazy." There are several Oscars, including the one for "Snow White and the Seven Dwarfs." Another neat piece of furniture to be seen here is Walt's school desk with his initials carved into it. You will also find many of the original models for some of the theme park attractions including Peter Pan's Flight and Sleeping Beauty Castle from Disneyland. A recent and extremely significant addition is the original Abe Lincoln Audio Animatronic that debuted at the 1964 New York World's fair. 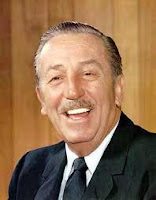 Walt Disney: One Man's Dream is an attraction that should be experienced by every Walt Disney World guest. I think that often times people mistakenly bypass it when they hear that it isn't a "ride" or a "live show." I feel that it is an important and necessary journey that explores the life of a man who was such a giant in the entertainment industry and who's work is still revered throughout the world. The attraction can be walked through in as little as 15 minutes, however you can easily spend over an hour enjoying all of the individual pieces that are on display. Each time I visit, I seem to find something new that I hadn't noticed before. Also, although it's not required, every guest should watch the film at the end of the tour. It is really a moving tribute to Walt Disney, a man who has directly and indirectly brought so much happiness to millions of people for nearly a century.

Have a Disneyriffic day and remember to keep moving forward.  See ya real soon!
Posted by Dave Drumheller at 10:50 PM