I was recently introduced to an interesting Disney collectible that I never knew existed. Most of us have seen pressed penny machines in the past. They can be found in grocery stores, shopping malls, hotels, etc. You can also find these contraptions in Walt Disney World. I have seen them here and there, but never realized the scope of what Disney has to offer. There are close to 200 machines located all around the Florida property. A directory of  pressed coin machines and catalog of the various designs can be found at Presscoins.com, the unofficial Walt Disney World pressed coin guide. 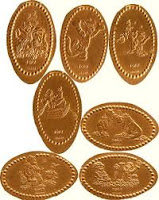 For those of you that don't have a clue what I'm talking about when I say "pressed penny" or "pressed coin," I'll elaborate. A pressed coin is created when a coin is squeezed between two rollers. One of these rollers has an engraving on its surface which makes an imprinted design on one side of the coin. In the case of the Walt Disney World machines, the designs are typically Disney characters or attractions. They have been primarily electrically powered, but many of the new machines have hand cranks.

The Walt Disney World pressed coin machines started appearing back in 1994 and have continued to grow in number ever since. Most of them contain pennies, but there are some that press quarters and a few that do dimes. You can find roughly 25 or so machines in each of the 4 theme parks, as well as 17 in Downtown Disney and 66 in the resort hotels. Each one contains up to 4 different designs. The cost to have a coin pressed is only 50 cents, plus the value of the actual coin.

Over the years, pressed coin collecting has apparently become quite a hobby. You can even purchase Disney pressed coin collection books to store them in. These coins also make great souvenirs for the kids. For only 51 cents a piece, you have unique and inexpensive trinkets from your favorite spots in Walt Disney World. On our last trip I spent $20 on a toy that my son found at the Magic Kingdom. The same $20 could get close to 40 pressed coins which can be picked out over an entire vacation. From what I hear, part of the fun of this experience is actually spotting the machines in different places. For a complete list of current coin machines, and their locations around Disney World, you can visit Presscoins.com. You can also find the specific pressed coin designs on the website. Finally, Presscoins.com even has lists of previous coins as well as special celebration coins. 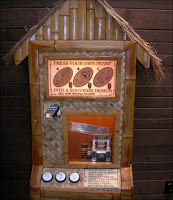 In all of my many visits to Walt Disney World, I never payed much attention to the pressed coin phenomena. However, I am looking forward to my next trip and introducing our son to the experience. I know he will enjoy finding the different machines and starting a collection. For a five year old, he is pretty savvy (or should I say he's a con artist) when it comes to gift shops and souvenirs. If nothing else, the pressed coin idea will let him get "lots" of souvenirs without burning a whole in my wallet!

Have a Disneyriffic day and remember to keep moving forward. See ya real soon!
Posted by Dave Drumheller at 8:47 PM