Today is by far the most important in my O.T.D. series, as we say happy birthday to Walt Disney World. On the morning of October 1st, 1971, the Magic Kingdom opened to the public. This momentus occasion marked the birth of the most popular vacation destination in the world. Since opening day, it is estimated that close to a billion visitors have visited Walt Disney World. The Magic Kingdom alone averages approximately 17 million guests per year. 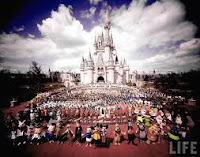 There are many interesting stories related to opening day. One of my favorites is told by Charlie Ridgeway, who was Disney's press agent at the time. He recalls that Disney had predicted about 10,000 guests, but the media kept increasing that figure. One East Coast paper predicted 200,000 and that was picked up by a foreign newspaper that added an additional zero, putting the estimated total at 2 million. They purposely opened in the off-season so they could work out any possible bugs. It turned out that Disney's estimate was right because only 10,000 visitors came that first day. Charlie remembers several Disney executives going up in a helicopter to see the traffic coming in to park. They were smiling because they saw a long line of cars. However, the line suddenly turned the wrong way and they realized that the cars weren't guests but cast members driving to work. They had about 5,000 cast members in those days. Although the opening day crowd wasn't overwhelming, Walt Disney World's popularity grew quickly and by the end of October the total attendance was about 400,000. The day after Thanksgiving in 1971 a huge crowd of over 50,000 guests entered Magic Kingdom. In it's first year in existance, nearly 11 million people visited Walt Disney World. 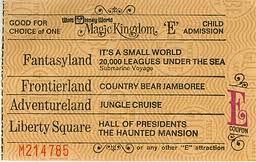 When the Magic Kingdom first opened, guests purchased a book of ride tickets similar to what you would get at a carnival. The tickets had five different designations labeled A through E, with E being the best rides. You could purchase an adult "Eleven Adventure Ticket Book" for only $5.75. That included admission to the Magic Kingdom, transportation, and eleven adventures (attractions). The same ticket book for children was $4.75. Although all attractions are now included in the price of admission, a one day ticket to any of the Walt Disney World theme parks is over $90. However, to put this in perspective, a gallon of gas in 1971 was only about 35 cents! Another major difference in the 1971 version of the Magic Kingdom compared to what we have today is the number of attractions. The park opened with 23 attractions and 20 of these were duplicates of what was already out in Disneyland. Today, the Magic Kingdom offers 46 attractions which is double the number from opening day.

Although we are primarily celebrating the 40th birthday of the Magic Kingdom today, October 1st is a significant day for several other Walt Disney Company events. Today also marks the 29th anniversary of the opening of Epcot, which was called EPCOT Center on this day in 1982. On the same day in 1983, the beloved (but now extinct) Horizons pavilion opened in Future World.  Two resorts opened on October 1st. Disney's first moderate class resort, the Caribbean Beach opened in 1988, and Disney's Vero Beach Resort, the first off-site Disney Vacation Club Resort, opened in 1995. October 1st, 2005 was the day that Bob Iger took over as the CEO of the Walt Disney Company. Finally, the last big "happening" that occurred on this date was in 2009, when the Walt Disney Family Museum opened in San Francisco. Although October 1st has been a prominent date in Disney's history, it will always be thought of as the day that Walt Disney World was born.

As I sit here writing this article, I am thinking of all of the great Walt Disney World memories I have from the past 35 years. My first trip was at the age of 5, which was also during the 5th anniversary of the Magic Kingdom. It has always been easy for me to know how old Walt Disney World is because I'm the same age. I know that I have mentioned this in the past, but I can't thank my parents enough for introducing me to this magical place that has become such a big part of my life. I am excited to say that I'm getting closer and closer to "creating" a career that is centered around Disney. I also just realized that this is article number 71, which coincidentally matches the year
that started it all. Happy Birthday Walt Disney World....thanks for the memories!
Have a Disneyriffic Day and remember to keep moving forward. See ya real soon!
Posted by Dave Drumheller at 11:36 PM