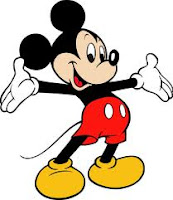 Today, we say happy birthday to the one and only Mickey Mouse. Although my "On This Date" series is typically dedicated to events related to Walt Disney World history, I felt it important to highlight this particular day because of its significance. Mickey is the character who really started it all for the Disney company. It can be argued that without the creation of Mickey Mouse, the Disney parks may never have been built.

There are some interesting stories related to the history of Mickey Mouse and how he was created. First, Walt's original "main" character was Oswald the Lucky Rabbit, which he created for Universal Studios. With the Oswald series going strong, Walt asked for an increase in the budget in 1928, but was told the budget would actually be cut by 20%. He angrily refused the deal, finished out the contract, and lost Oswald to Universal. He also lost a majority of his staff in the ordeal. However, a few loyal artists remained, including Ub Iwerks.

Walt asked Ub Iwerks to draw up some new character ideas. He created several animals, but Walt wasn't to excited about any of them. Walt got the inspiration for Mickey from his old pet mouse who used to live on his farm. He had Ub create the new character who Disney originally named Mortimer Mouse. Walt's wife Lillian thought that Mortimer wasn't the best name choice and convinced Walt to change the name to Mickey. Can you imagine the Mortimer Mouse Club, or hidden Mortimers, or even Mortimer's Very Merry Christmas Party? It just doesn't have the same ring as Mickey. The world owes a debt of gratitude to Lillian Disney for coming up with the name for who is probably the most famous animated character in history.

So how does November 18th, 1928 mark the date of Mickey's "birth?" This was the day that the animated short film Steamboat Willie came out, which was Mickey Mouse's debut. In that film, Walt himself provided the voices for all the characters. However, there isn't any spoken dialogue, just whistles, grunts, laughter and other vocal sounds. It was the beginning of a long and very successful career for Walt and Mickey. Mickey went on to star in over 130 films and 4 television series. 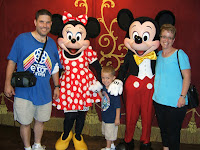 Beyond Mickey's fame as an animated film and tv star, he is the most beloved character in the Disney parks. As the "big cheese" he continues to command the longest lines and largest crowds of adoring fans looking to get a picture or an autograph. Town Square Theater in the Magic Kingdom recently became the primary meet-and-greet location for Mickey and Minnie. You can actually get a FASTPASS there to avoid the typically long wait times to meet the mice. Guests get to go "backstage" into Mickey's dressing room to get their picture taken with him and Minnie. The amount of detail that Disney put into this area is amazing. 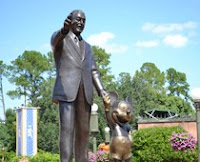 Mickey Mouse has been a household name for nearly a century. He has entertained kids and kids at heart from all over the world. It is very fitting that there is a sculpture of Mickey and his creator right in the middle of the hub in the Magic Kingdom. The "Partners" statue is a tribute to wonderful man and his little friend, Mickey. It was Walt Disney himself who was quoted as saying "I only hope that we never lose sight of one thing - that it was all started by a mouse."

Have a Disneyriffic day and remember to keep moving forward. See ya real soon!
Posted by Dave Drumheller at 11:48 PM