With my "DDW Pic of the Day" series, it should be pretty obvious that I am a big fan of Walt Disney World photography. The "Most Magical Place on Earth" certainly offers some amazing photo opportunities. The most photographed spot in the world is right in front of the Magic Kingdom. My personal Disney World photo library contains over 3,000 pictures and it continues to grow. My wife affectionately refers to my camera as the "girlfriend," and there is no question I have a minor photography obsession. However, as much as I love taking Disney pictures, I must admit that there are others who are also camera savvy.  The work of several of these photographers can be found on the WDW Pics App. 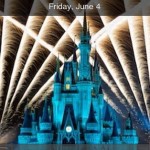 I was recently introduced to the WDW Pics App by my friend Annie who has it on her iPhone. It falls into that category of simple, fun apps that can bring a little Disney Magic to your handheld device. It contains over 100 high quality photos taken from all over Walt Disney World property. Although a majority of these shots are from the parks, there are some really nice ones from the resort hotels as well. My favorites have to be the ones of the fireworks shows. It has always been a challenge for me to get nice, clear fireworks shots with my "basic" camera, so I'm impressed with the high quality ones that are found on the app. There are also a bunch of nice close-up photos as well as several shots that are enhanced with some creative editing.

As nice as the WDW Pics App photos are to browse, they also serve another purpose. They can actually be saved to your device and be used as wallpaper. This is a really nice touch as you can change your Disney background to whatever suits your mood. There is also an "order print" button that takes you to the website where you can purchase the actual prints. 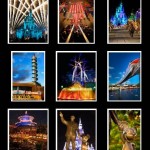 The app is hosted by the folks over at www.WhereInDisneyWorld.com. The pictures were taken by four talented photographers: Tom Bricker, Cory Disbrow, Paul Gowder, and Matt Pasant. It is available on the iPhone, iPad and iPod Touch. It is also available for Android devices. However, for whatever reason, the quaility is far superior on the Apple products. In addition to the WDW Pics App, this group also puts out the WDW Holiday Pics App, which features great Disney World holiday photos with a focus on Christmas and Halloween. I highly recommend both apps, and at only 99 cents each they are definitely a bargain!

Have a Disneyriffic Day and remember to keep moving forward. See ya real soon!
Posted by Dave Drumheller at 9:47 PM