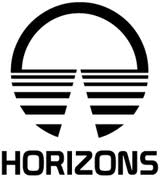 Today we look back and remember one of the best attractions in the history of Walt Disney World. On January 9th, 1999, Horizons closed its doors for the final time. This beloved pavilion in Epcot's Future World opened on October 1st, 1983 and delighted guests for over 15 years. It was one of my favorite  attractions and it was a must-do on all of our family vacations.

Horizons was a "dark ride" that took guests on a 15 minute journey with scenes that depicted visions of the future. Much like Spaceship Earth or the Magic Kingdom's Haunted Mansion, it utilized Disney's Omnimover ride vehicle system. This allowed for continuous loading and helped to keep wait times to a minimum. Horizons started with a section that showcased visions of the future as perceived from the late 1800s through the 1950s. Next, the ride moved through the "OmniSphere," which was basically a theater made up of two gigantic, curved IMAX movie screens that were eight stories tall by eight stories wide. This section depicted technologies and ideas that could be used to move us into the future.

After moving through the OmniSphere, we came to the main focus of the ride. This was a series of scenes showing what life would be like in the future. We would see visions of city life, the desert, under the ocean, and outer space. Like every good attraction, Disney did a great job of telling a story in Horizons. In fact, it is believed to be the sequel to Walt Disney's Carrousel of Progress. The Horizons story utilized a futuristic family to show guests what might be coming in the 21st century. They featured technologies such as video conferencing and holograms, as well as hovercrafts and space stations.

The final section of the ride was groundbreaking. For the first time, Disney gave guests a choice on how they would like their journey to end. Their "shuttle" would take one of three flight paths back to FuturePort, which was the fancy name for the load/unload area. Each rider selected space, desert or undersea from a digital panel on the ride vehicle. Each vehicle held up to 4 guests and majority ruled. The group then took a 30 second "flight simulator" trip to complete their experience. This was incredible technology for 1983. It was always fun to ride Horizons with friends and family, as we'd bicker over how our ride would end. If I got my way, it was always a flight through space!

I have wonderful memories of Horizons. My dad took some great video footage of the attraction on our vacation back in 1984, and we spent many hours re-living these memories on tape. There is a scene in the ride where the family is celebrating their son's birthday. It hit close to home when they sang "Happy Birthday to Davey," as it always sounded like they were singing to me!

Originally, Horizons was going to be called Century III, to recognize the third century of America. However, Disney didn't think that the name would appeal to international guests, so after much debate they settled on the name Horizons. Many Walt Disney World attractions have corporate sponsors and Horizons was no different. General Electric sponsored this attraction from the beginning and was involved in much of the decision making, including the name. Unfortunately, GE ended its sponsorship in 1994 and the ride temporarily closed. It reopened in 1995, however, due to other Future World attractions going down for refurbishment.

Horizons remained open until Test Track was ready to open to the public in early 1999. On January 9th of that year, Horizons closed forever. In July of 2000, demolition began on the attraction, which marked the first time an entire ride building was demolished to make way for a new attraction. Mission Space opened on this site in August of 2003. It is a fun and unique attraction, but nothing could ever top Horizons, which will live forever in the memories of Walt Disney World fans.

Have a Disneyriffic Day and remember to keep moving forward. See ya real soon!

Posted by Dave Drumheller at 3:26 PM