One of my greatest pleasures in writing this blog is discovering and enjoying other Walt Disney World fan sites. Over the past year, I have been amazed at how many other talented Disney enthusiasts I have discovered who are sharing their thoughts and ideas using this relatively new technology. Like myself, many of these people are involved in more than one Disney endeavor. This is certainly the case with Chuck Lionberger and his Disney Daddy blog. 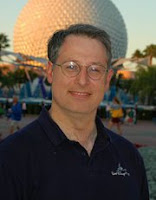 The Disney Daddy blog started back in September of 2008. Unlike many of us long-time Disney World fans, Chuck had caught the bug more recently. He had only been to the vacation kingdom one time before 2007, and it was nearly 30 years prior. However, after his first trip as a "daddy," he completely caught the bug and took two more family trips in the following year. It didn't take Chuck long to become involved in the Disney online community and start his own blog.

DisneyDaddy.blogspot.com is where you can find Chuck's writings on the world of Disney. He does a nice job of bringing us interesting stories related to the "most magical place on earth." He talks about everything from attractions, to resorts, to special events. He also has two regular weekly features. First, he has "Tip Tuesday" where he shares useful and insightful tips to help readers get the most out of their Walt Disney World experiences. More recently, Chuck added another great recurring post called "Photo Friday." Much like my DDW Pic of the Day, he features a picture that he personally shot along with a detailed description. Some of these pictures are breathtaking and its pretty clear that he knows a little something about photography.

In looking back at some of Disney Daddy's older writings, I found that Chuck and I have something in common. Both of us mentioned the WDW Radio and Inside the Magic podcasts in our very first article. We both talked about how the hosts of these shows had inspired us, and we even thanked them in our posts. Since our humble beginnings, we have both become friends with Lou Mongello of WDW Radio. Chuck has actually been a guest on Lou's show on several occasions where he has talked about things such as Disney's PhotoPass and pin trading at Disney World. My favorite show that featured Chuck was one about collecting pressed pennies on a Disney vacation. After learning about this phenomenon, I wrote an article all about it in September. In addition to his WDW Radio appearances, he has written articles for Celebrations, a bi-monthly magazine published by Lou Mongello and Tim Foster. In a few short years, Chuck has become very well known in the Disney online community.

Although we have alot in common when it comes to our love of Walt Disney World, Chuck and I have one significant difference. Last weekend I ran my first 5K, however he actually completed the full marathon! For those of you who aren't runners, a 5K is approximately three miles where a marathon is over 26 miles. All I can say is that I'm very impressed with his accomplishment and aspire to follow in his footsteps (literally) one day. I also had the pleasure of meeting Chuck over the weekend, and it was very nice chatting with a "colleague" who also ran to raise money for the Make-A-Wish Foundation. He is a real gentleman who is married to Mickey (that is seriously his wife's name). I highly recommend checking out the Disney Daddy blog and any other Disney related stuff that Chuck does in the future.

Have a Disneyriffic day and remember to keep moving forward. See ya real soon!
Posted by Dave Drumheller at 11:48 PM