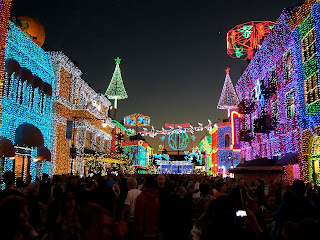 On our most recent trip, I had the opportunity to see the Osborne Spectacle of Dancing Lights for the first time. This is an amazing display that adorns the Streets of America at Hollywood Studios during the holidays. It was started by Jennings Osborne, many years ago, as decorations on his family's home in Arkansas. The display grew year after year until the family generously decided to share their magic in 1995, when Walt Disney World became the new home for this "spectacle." The lights come on every night at dusk and periodically "dance" to upbeat Christmas tunes. Like at Mickey's Very Merry Christmas Party in the Magic Kingdom, it actually snows during the display. For anyone visiting during the holidays, I highly recommend heading over to Hollywood Studios to check out the Osborne Family Spectacle of Dancing Lights. You won't be sorry!
Posted by Dave Drumheller at 7:56 PM