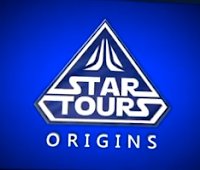 Walt Disney said that his theme parks would always be changing and evolving and would not be a "museum." This is certainly true as new attractions are continually being developed and built. Often times, Disney takes current attractions and refurbishes or "pluses" them to enhance the guest experience. For those of us who make frequent trips to the Vacation Kingdom, this is welcome change as it is always fun to see new things. However, also being Disney nostalgics, we often miss rides that are closed or changed. Through the use of modern technology, many of the old attractions are preserved through blogs, websites, and YouTube videos. This week, an absolutely amazing video debuted that pays tribute to a recently updated classic attraction in Hollywood Studios.

"Star Tours Origins" is much more than a simple ride video. It is a completely computer generated re-creation of the original attraction. It was created by an obviously talented independent filmmaker named Gregory Noacco, and was done independently of both Disney and Lucasfilm. He worked for over six months to create this masterpiece, which allows us to experience the first incarnation of Star Tours in video form. In addition to the actual movie, it also shows loading and unloading from a first-person perspective. It is available in two versions on YouTube. In addition to the standard 2D video, which is very high quality to begin with, Gregory also created a stunning 3D version.

The original attraction debuted out in Disneyland in 1987 and then in Hollywood Studios in 1989. It delighted park guests through 2010 when it closed for a major refurbishment. When the attraction reopened in 2011, it was renamed Star Tours: The Adventures Continue. The new version is a technological marvel as it combines a motion simulator, 3D technology, and multiple scenes that change from ride to ride. There are 11 random segments which allow for 54 different possible ride experiences. This new version of Star Tours is fantastic, but there will always be a warm spot for the original. Up until now, we could only enjoy it by watching amateur home videos, but "Star Tours Origins" has changed that. Gregory's hard work has preserved this attraction for future generations to enjoy.

Have a Disneyriffic Day and remember to keep moving forward. See ya real soon!
Posted by Dave Drumheller at 9:49 PM