Just a few days ago, the world lost a great Disney legend. Robert Sherman passed away at the age of 86. He and his brother Richard were the amazing song writing duo known as the Sherman Brothers. They composed so many Disney favorites including all of the music for Mary Poppins. They are also known for much of the music we hear in the parks like the "Tiki, Tiki, Tiki Room," "Winnie the Pooh," "One Little Spark," and "There's a Great Big Beautiful Tomorrow," to name a few. However, their most popular and significant piece has to be "it's a small world." Disney fans owe a huge debt of gratitude to the Sherman's for bringing us such joy with their music. Although Robert is gone, his music will truly live on forever. In his honor, I would like to feature a relatively new iPhone and iPad app put out by Disney. 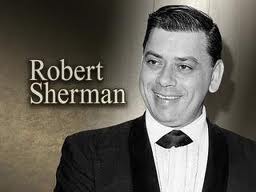 The "it's a small world" app takes us on a fun journey through an animated version of the beloved attraction. It contains 15 scenes from all over the world that contain the children and animals that we see on the ride. Each scene features one line from the song that is spoken in a child's voice. As the scenery moves by at a very slow pace, we can touch different objects on the screen that elicit interactive responses. For example, when we touch on a child playing an instrument, that instrument gets louder and the musician does a little move. As each scene draws to a close we are brought into the clouds via hot air balloon and then lowered into the next area. We also have the ability to slide our finger to move backward in a scene, as to not miss any of the interactivity.

In addition to the fun of exploring each area of the world, this app concludes with two special scenes that relate to the actual ending of the attraction. In the very last part of the ride, there are brightly painted, two dimentional cut-outs with the words for 'goodbye' written in languages from around the world. In the app, the second to last scene has children sitting on the branches of a tree. When you tap on one, he will say goodbye in his language and the written word will also appear. The final scene in the app is a sing-a-long of the full Sherman Brother's tune where you can follow the "bouncing ball" over the written words of the song. It features five children lying on their backs, looking up to the stars. You can tap anywhere in the sky to set off random, multi-colored fireworks. 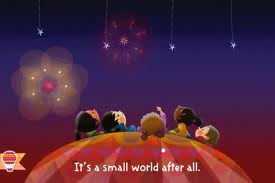 The "it's a small world" app is fun for all fans of the attraction. Although the interactivity and exploration aspects are certainly aimed towards young children, this is a must have app for any small world nostalgic. It definitely captures the feel and message of the attraction. Like many interactive apps, this one is easier to use on the iPad, but does just fine on the iPhone. I will say that the $3.99 price tag is a little steep, but the level of detail seems to warrant the cost. Considering the price for one day in the Magic Kingdom is nearly $90, four bucks doesn't seem that bad to take home a little of the magic!

Have a Disneyriffic Day and remember to keep moving forward. See ya real soon!
Posted by Dave Drumheller at 11:44 PM