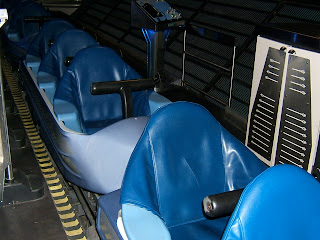 This is a close up look at the "rocket" ride vehicles from Space Mountain. They are made up of two cars with three seats in each. On this modern version, each guest has his own seat. However, in the old days, guests basically sat "stacked" against each other without individual seat backs. Shortly after this shot was taken in January, we hopped in our rocket and the ride temporarily broke down before we launched. However, in true Disney fashion, every guest in line was given a universal FASTPASS to ride any ride they wanted for the rest of the day.
Posted by Dave Drumheller at 11:01 PM