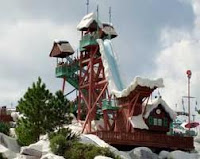 The notion of snow in Florida seems a little crazy, but it is a major part of how Blizzard Beach was created. As the story goes, there was a freak snowstorm at Disney World, leading to the construction of Florida's first ski resort. Obviously the snow didn't hang around long, but a collection of ski jumps and chair lifts were left behind. The parks mascot, "Ice Gator," was seen sliding down a flume into a pool of water and the ski resort was quickly turned into a water park.

Blizzard Beach sits on 66 acres, which is very large by water park standards. It is home to some of the most unique water attractions to be found anywhere. The flagship attraction and park icon is Summit Plummet. It is the tallest and fastest free fall water slide in North America. It had the distinction of being the tallest and fastest in the world until the opening of Insano, at Beach Park in Brazil. Summit Plummet is 120 feet tall and guests reach speeds of 60 miles per hour lying on their bare backs! I rode this ridiculous attraction many years ago, and I am not sure that I'd have the courage to do it again.

In addition to Summit Plummet, Blizzard Beach is also home to the longest "family white water raft ride" at 1,400 feet long. For less adventurous guests, there are many enjoyable attractions that don't get your adrenaline pumping. The Cross Country Creek is a 3,000 foot slow moving "river" that allows guests to float around on their own inner tube. It is a relaxing way to spend an afternoon. However, I will say that it is important to wear your sunscreen. A few years back, I fell asleep on the Typhoon Lagoon version of this lazy river, and talk about a bad sunburn! Blizzard Beach also has a one acre wave pool that is fed by "melting snow" that creates gently bobbing waves to enjoy.
This water park really has something for everyone. Even if you don't feel like going in the water, but want to spend the day with friends or family, it still can be a fun place to hang out. You can pull up a lounge chair and work on your suntan or read a book. There are several good places to grab a bite to eat and even a couple of bars where you can enjoy your favorite drink. After seventeen years, this very popular water "theme park" continues to be a great place to spend a day at Walt Disney World. Happy birthday Blizzard Beach!

Have a Disneyriffic Day and remember to keep moving forward. See ya real soon!
Posted by Dave Drumheller at 10:02 PM