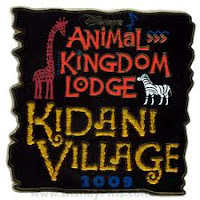 Today is a pretty significant date in Walt Disney World history. First and foremost, it is the anniversary of the opening of Hollywood Studios, which debuted on May 1st, 1989, with the name Disney MGM Studios. I wrote an article about this occasion last year, on the park's 22nd birthday. The second major event to occur on May 1st also happened in 1989, with the official opening of Pleasure Island, which pretty much closed a few years ago. Last, but not least, we say happy 3rd birthday to Kidani Village at Animal Kingdom Lodge. I had the pleasure of staying there this year, and I'd like to share my thoughts on the resort. 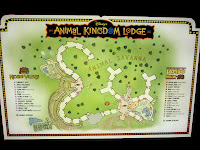 Kidani Village is a Disney Vacation Club (DVC) resort, however it is open to non-DVC guests as well. It is connected to the Animal Kingdom Lodge Jambo House by a half-mile long walkway, and basically the two areas make up one big resort. This is similar to Bay Lake Tower at the Contemporary Resort. Guests are able to take advantage of the amenities at both resorts, with the exception of the Samawati Springs pool, which can only be used by DVC members.
The name Kidani is Swahili for necklace, which is the general "shape" of this resort. It is set up with two long, curving halls that extend out from the center building. If your room is toward the end of one of these "strands," it can be quite a hike from the lobby. Although, it probably felt farther to me as I had walked over ten miles in the parks on both days that I stayed here. It was also the weekend we ran the 5K. 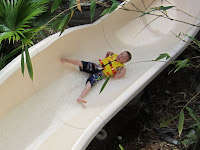 This entire Animal Kingdom Lodge Resort (including Kidani) is really a destination unto itself.  With three signature restaurants, two of the best pools on property, and a whole bunch of animals, you can spend days here without even going to the theme parks. On a recent trip, we spent the better part of a day at the Uzima Springs pool and another day at the Samawati Springs pool. Each one has a lot to offer, but our little guy really loved the bigger water slide at Samawati. In addition to swimming, they show Disney movies on a large inflatable screen at each pool on a nightly basis. 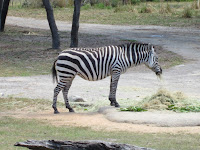 A large number of the rooms at this resort overlook savannas where you can watch Giraffes, Zebras and many other unique animals roam the grounds. Even if you don't have a "savanna view" room, there are many public viewing areas. They even have night-vision binoculars that you can use after dark. In one of the common areas, located outside of the lobby, guests can sit around a campfire at night. 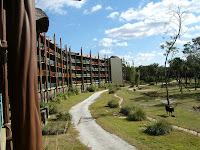 Last, but certainly not least, I have to mention the incredible overall theming of the resort. This is a great example of how Disney utilizes all five of your senses in immersing you into the African story. Some of the sights are breathtaking, such as the lobbies, the views of the savannas, and the authentic African art found in many different areas. The sounds of drums seem to be ever present throughout most of the day. The constant smell of the food emanating from the restaurants is inviting, along with the scent of the fire pits. The taste of the food, especially from Boma and Jiko (two of the best restaurants at Disney World), is delicious. They even employ the sense of touch, as there is a wooden door near the lobby exit, with a sign that says "Please Touch Me," which a tribe in Nigeria believes will send you safely into the future.
Animal Kingdom Lodge's Jambo House and Kidani Village have quickly become two of my favorite resorts. If you are planning a Disney vacation, but aren't going to go to the parks everyday, I would certainly recommend this resort as the top choice.  When you are spending time there, you almost forget that the most popular theme parks in the world are so close by. Even if you are staying at a different hotel, it is certainly worth a visit. Happy 3rd birthday Kidani Village!

Have a Disneyriffic day and remember to keep moving forward. See ya real soon!
Posted by Dave Drumheller at 10:12 PM