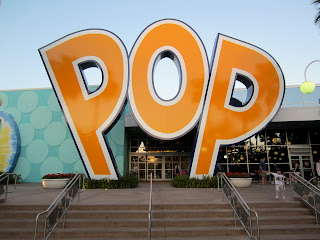 Pop Century is considered by most to be the nicest of the "value" resorts. This shot was taken in April and I was standing in the area in front of the pool, looking back toward the main building. Originally, there was a second section planned for Pop Century that would have doubled the size of this resort. However, Disney changes those plans and used that area to build the Art of Animation Resort, which is opening next week.
Posted by Dave Drumheller at 11:31 PM