Digital Disney World has always been about "connecting" us to the Vacation Kingdom. Whether it be through digital pictures, apps, podcasts, or websites, there are so many ways to enjoy Walt Disney World, even when we can't be there ourselves. The website that I'm going to be talking about today is also about making a connection. It helps us connect Disney films to the theme parks in a fun and enlightening way.

FromScreentoTheme.com is the official website of Brent Dodge. Brent is a former member of the Walt Disney World College Program and a huge Disney fan. Back in 2008, he decided to write a book about the references to Disney films found throughout the parks. The name of this book is "From Screen to Theme: A Guide to Disney Animated Film References Found Throughout the Walt Disney World Resort." The book has led to the creation of Brent's website. Although it certainly promotes the book, this website has a whole lot more to offer.

In addition to being an author, Brent is also an accomplished Disney trivia buff. To say that he knows a lot about "The World" would be an understatement. He led the team that won the first ever D23 Walt Disney World Scavenger Hunt in 2011. This event had hundreds of competitors, including some of the most prominent podcasters, bloggers, and Disney experts. Brent certainly elevated his reputation in the Disney fan community at that event, not to mention that he won a cruise for his efforts!

Besides spreading the word about his book, Brent utilizes his website to share his vast Disney knowledge and passion. He has a "Days of the Week" section that highlights things like food, games and hidden Mickeys. Many of the articles are contributed by guest writers. There is also a "Forums" area where fans can communicate about their favorite Disney subjects. The next section of the site is the "W.E.D.nesday Show" which is home to Brent's weekly video podcast. He has been hosting this show since 2009 and has done close to 150 of them. You can find most of the episodes archived here.

The next section of the website, labeled "A Closer Look," features detailed overviews of the Walt Disney World theme parks. Brent includes interesting trivia as well as tips in this area. The "Books" section of the site allows you to order "From Screen to Theme." You can also pick it up for the Kindle and the Nook. Brent is writing two additional books that he mentions in this area of his website, one of which should be out soon. 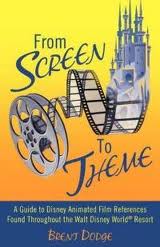 The "Other" section of the website is definitely not an afterthought. There are several fun, trivia style games that are updated on a daily basis. There are also some great videos that Brent has taken at the parks. This is the area of the site where you'll find his blog and can read Brent's personal thoughts on Disney  related topics. Finally, you can come to the "Other" section if you are interested in current events related to Disney. Brent does a nice job of covering the latest news, such as movie trailers, new attractions, and construction progress.

Overall, FromScreentoTheme.com is an excellent website with a bunch of great content. First off, if you are a fan of Disney movies and Walt Disney World (and who isn't?), you need to get Brent's book as soon as possible. If you are looking for a place full of fun trivia, daily content, and news updates, this is definitely a great site to check out. Brent Dodge is a talented Disney fan and an obvious asset to the online community!

Have a Disneyriffic day and remember to keep moving forward. See ya real soon!
Posted by Dave Drumheller at 10:40 PM