A Closer Look: At the Magic Kingdom's Fantasyland 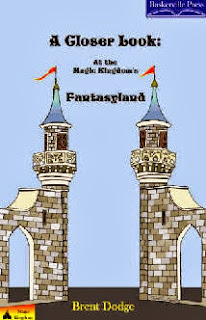 In the nearly three years writing the Digital Disney World blog and two years giving private guided tours, I have been fortunate to meet many interesting people in the Disney fan community.  I have also made some great new friends during that time.  Although most of these folks have a passion for Walt Disney World, there is one who sticks out from the rest, and his name is Brent Dodge. Brent is a self proclaimed Disney nerd, as well as successful Disney podcaster, blogger, and historian.  He has spent over 2,000 days in the Disney parks as a guest and holds the record for visiting the most days in a row.  Simply put, Brent goes to Walt Disney World every single day!

As somewhat of a Disney "nerd" myself, I have read most of the books on the subject of Walt Disney World, and I'm always interested in anything new that is related to the "most magical place on Earth."  I thoroughly enjoyed Brent's first book, From Screen to Theme, and I was excited to hear that he completed his second.  The new book is called A Closer Look: At the Magic Kingdom's Fantasyland, and I just finished reading it this week. Although I don't typically do book reviews, I couldn't pass up the chance to write about this little gem.

When I heard about the subject of Brent's latest piece of literature, my first thought was that I probably already know everything about Fantasyland.  After reading just a few pages, I realized how wrong I was.  First off, many Disney "guide books" contain good information, but aren't necessarily enjoyable to read.  Like Walt Disney himself, Brent is a good story teller and he makes "facts and figures" sound very interesting.  Anyone that has met him knows that he has quite a personality, and it certainly comes through in Brent's writing. I could "hear" his voice as I was reading the book

Brent did a nice job in the sequencing of the book.  He starts with the park's icon, Cinderella Castle, and takes us on a literary tour around Fantasyland.  After leaving the castle courtyard, he heads us to the right toward The Many Adventures of Winnie the Pooh, around the Mad Tea Party and down into Storybook Circus.  We then learn all about New Fantasyland before finishing up with the classics and the transition into Liberty Square.  At the end of the book, Brent discusses the "past attractions" that many of us remember enjoying from days gone by.  Throughout A Closer Look, he does a great job of mixing the right amount of history with what is actually located in Fantasyland today.

Although this book can be enjoyed from anywhere, it is a lot of fun reading it inside the Magic Kingdom. It is great to be able to immediately see (with your own eyes) exactly what Brent is describing throughout Fantasyland.  A Closer Look acts as a virtual tour guide, and you can almost hear the author's voice coming to life as he accompanies you on your journey through the park.  There were a few details in Storybook Circus that I read about and couldn't wait to check out. Thankfully, since I was perusing that chapter while riding The PeopleMover, it was only a short walk past Space Mountain to the location I was reading about.  Although I read a majority of the book at home, I think it works great as a reference guide while strolling through the park.

I highly recommend A Closer Look: At the Magic Kingdom's Fantasyland.  It is simply a must read for every fan of Walt Disney World.  I am hoping that this is just the first in a series of Closer Look books from Brent Dodge.  After finishing this story about Fantasyland, I couldn't help but want to hear more about the Magic Kingdom.  I actually hope that Brent will write similar books for each Walt Disney World park.

It couldn't be easier to get your hands on this book as it is available in the Amazon Kindle Store for only $0.99!  This means you can read it on just about any portable electronic device, which makes it easy to bring it to the Magic Kingdom with you.  If you like the feel of an actual book in your hand, you can order a copy over at Brent's website, FromScreentoTheme.com for $8.99.  Either way, A Closer Look: At the Magic Kingdom's Fantasyland should be in your library as soon as possible.  It is truly a great book!

Posted by Dave Drumheller at 11:33 PM